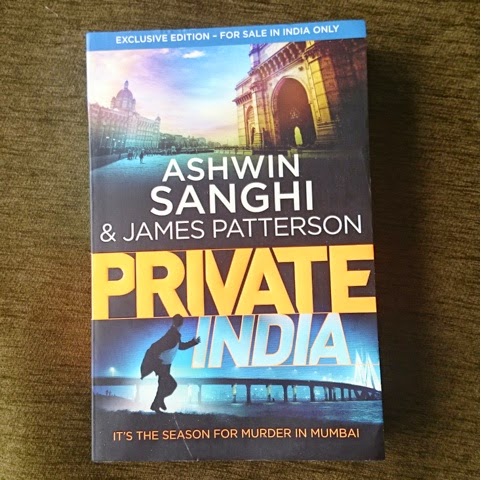 I came back from a weekend trip to find Ashwin Sanghi’s newest offering waiting for me. PRIVATE INDIA is a collaboration between this Indian author who loves to bring in mythological twists into his thrillers and James Patterson, an American author who also, is famous for his thrillers (though I haven’t read any of James Patterson’s books…as yet).

In Mumbai, seemingly unconnected people are dying, strangled in a chilling ritual and with strange objects carefully arranged with the corpses.
For Santosh Wagh, head of Private India, the Mumbai branch of the world’s finest investigation agency, it’s a race against time to stop the killer striking again.
In a city of over thirteen million, he’d have his work cut out at the best of times, but this case has him battling Mumbai’s biggest gang lord and a godman who isn’t all he seems.
And then he discovers there may be an even greater danger facing Private India. Hidden in the shadows is someone who could destroy the whole organisation – along with thousands of innocent Mumbai citizens.

If I had to describe this book in one word, I’d call it “UNPUTDOWNABLE”. Yes, I know that’s not a real word but it is very fitting for this book. I stayed reading it on Tuesday afternoon and was done with it by Wednesday evening.  Like I said,  unputdownable. Of course,  that also meant that I was up reading it till 2am while hubby grumbled and kept telling me to switch off the lights.

Previously,  I have been a bit disappointed with the way Sanghi’s books have ended.  Mainly Krishna Key and Rozabal Line. The climax of those two books was ironically, anti-climatic. PRIVATE INDIA,  however,  keeps the pace throughout, it doesn’t slack anywhere and doesn’t let your attention waver.  Just when you feel that you can guess who the murderer is,  there comes a twist in the tale and you’re back in the guessing game. But,  while it is a page turner for sure,  the characterisation and language are a let down.  They aren’t truly in sync with Sanghi’s usual style. Are they Patterson’s? I wouldn’t know since I haven’t read any of his books.
The main characters here are Santosh Wagh, the chief detective of Private India (which is a private detective agency) with a tragic past,  who is assisted by Nisha (very attractive),  Hari (a tech genius)  and Mubeen (forensic expert,  again with a tragic past).  There’s also Inspector Rupesh who once was Santosh’s best friend but now can’t stand him.
There are times when this book feels like a literary version of Murder 2 in which its misogynist villain murders women because he feels they are to be blamed for his hyperactive s*xuality. Though,  as you find out at the end,  that is not the case,  Sanghi could probably try his luck and approach the Bhatts to make Murder 4 based on Private India. I can imagine Arijit Singh singing a soulful song for Emraan Hashmi as he remembers his tragic past…
But it’s not just about murders.  There’s the Indian Mujahideen, a corrupt politician,  a godman named “Nimboo Baba”, an underworld ganglord, to add masala to the tale. The parallel plot involving the Indian Mujahideen was a disappointment though. I felt it was a bit flimsy and not really required at all. They should have just stuck to solving the murders.  Also, I wonder,  would the Mumbai Police really hand over murder cases to a private detective agency?  Especially when they aren’t just random killings but serial murders? These and a couple of other “loopholes” do feel annoying but then the intriguing murder mystery quite makes up for it.
As with several bollywood blockbusters, Private India also delivers fast paced entertainment. Just don’t try and find too much logic. Sit back and enjoy the read.
Comments (3)
Ashwin Sanghi book review book review of Private India Private India