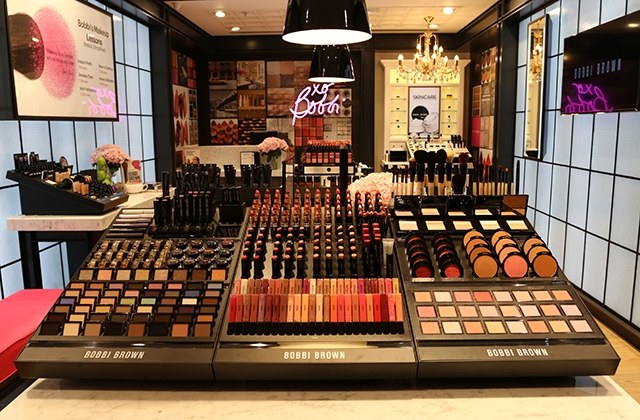 The high priestess of makeup, Bobbi Brown, finally decided to open a store in Mumbai, after having three (yes three!) stores in Delhi. Ever since I saw the “Coming Soon” banner at the htt email Palladium Mall, I was super excited and couldn’t wait for the store to open. So you can imagine how super thrilled I was when I got an invitation to preview the store before it opened….

Blend is your friend! “

I got this priceless piece of advice from Eliano Bou Assi, Regional Director of Artistry and Education, Bobbi Brown Cosmetics, during the makeup lesson that he supervised. Besides this advice, he also gave me tips on how to cover my dark circles effectively.

Industrial chic-meets-Soho-loft is how the interiors of the store (inspired by Bobbi’s kitchen) can be described. While you have industrial touches in the steel cabinetry and lamps, the Carrara marble table tops and ornate chandelier give the store a warm and welcoming environment.

Bobbi Brown revolutionised the beauty industry in 1991 with the launch of 10 brown-based lipsticks ad a simple philosophy that, with the right makeup and knowledge, women can look like themselves, only prettier and more confident. More than twenty-two years later, Bobbi’s holistic and empowering take on beauty speaks to women of all ages and all ethnicities around the world and has finally reached Aamchi Mumbai.

Bobbi believes that beauty should be personal, simple and accessible and that every woman can look and feel her best wth the right knowledge and the right products. Inspired by this belief, Bobbi Brown Cosmetics offers an extensive “Menu” of personalised and complimentary makeup lessons to help women enhance their beauty in as little as 5 minutes to (Instant Pretty) to as much as 20 minutes (Cheeks and Lips, Smokey Eyes). I opted for Anti-fatigue eyes since I wanted to perfect the art of concealing my dark circles. Of course, I  wouldn’t just stop at the eyes once I got started, would I?

I’m so happy that Mumbai finally has a Bobbi Brown store. Especially one that’s close to my home and not somewhere in the suburbs. I can’t wait to go back and try out the foundations, Art Sticks and the new shimmer gel liners 🙂 . What are your favourites from Bobbi Brown? Any recommendations for me??