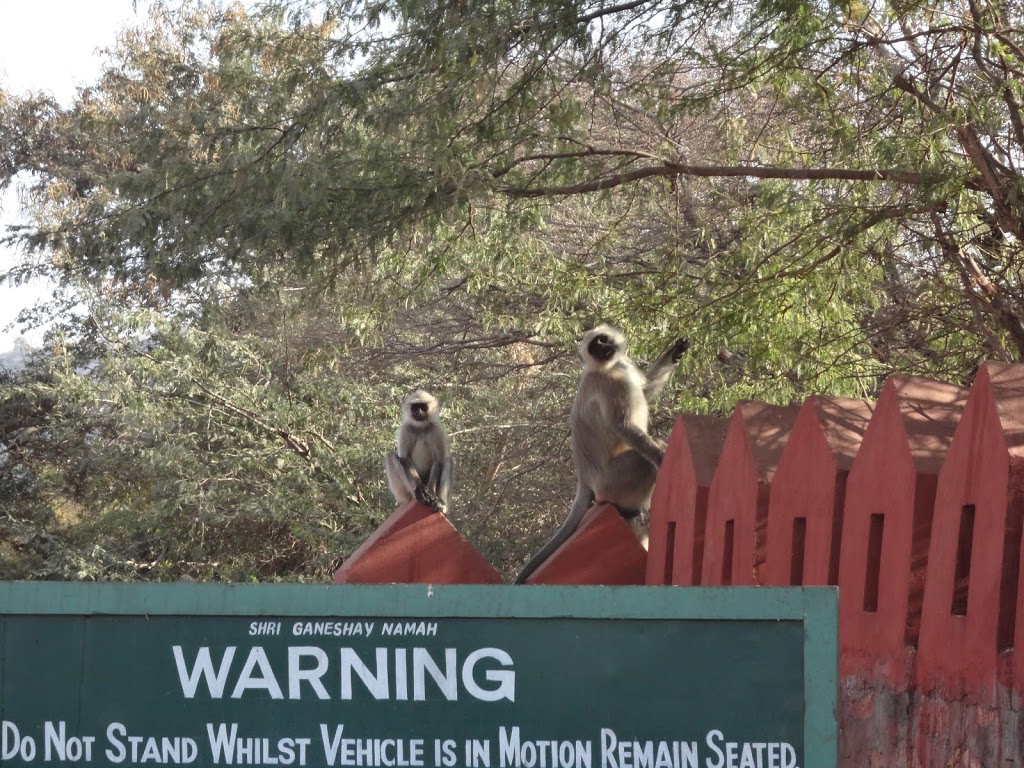 Yesterday, I posted about the birds that I had spotted at Ranthambore National Park (you can read it here). I wish I could put up more pics of the jungle landscape and the birds too but they’re all such heavy pics and take ages to upload.

Anyway, here are some of the animals we spotted. The very first ones were……..Monkeys!!! Loads of them…

This fella was sitting right above our heads and even did potty!!! Though we got lucky and it didnt fall on us or our cams…fell on the seat…narrow miss.

We also saw plenty of stags, spotted deer and even some Nilgai (blue bull)  but couldnt get any pics of those.

On the first safari, we spotted a tiger from afar and while the others all stood up on their seats and got a better look at him, I missed out coz sonny boy was napping on my lap. All I saw was a blurry orangy shape moving away.

I also went for two morning safaris. Actually, either hubby or I could go coz someone had to be with the boys while they slept. I didnt want to wake them up in the chilly weather and take them for a windy drive since they already had a cold and they’re a bit young for that too. Hubby opted for the sleep with kids option coz he knew I was really eager to go for the morning drives.

The first morning safari gifted us the sighting of a bear!!! The guide told us that a bear sighting was even rarer than that of a tiger. The huge black creature ambling along in the wilderness was truly an amazing sight.

We had heard that a tiger had killed a Nilgai in zone one (the Ranthambore National Park is divided into zones 1 to 9 and you get permission for any one zone at a time…unless of course you have contacts who can get you a free zone permit) and for two of the safaris we tried to get zone one permission but they had already maxed out on the permitted vehicals for that zone. Finally, for our last safari for the holiday, a morning one that too, we got permit for zone one.

Tigers generally stay near the kill for 2-3 days eating their fill at intervals and then they head back into seclusion and are not spotted for 3-4 days. We were hoping and praying that the tigers still had a bit of appetite left and had not left that spot. Our prayers were answered and we saw the daddy tiger sitting on one side in the grass and the mom and baby (toddler actually from the size of him) on the other side. After a few minutes, daddy got up and went for breakfast, soon the toddler joined him and momma went last of all. We couldnt see them with naked eyes but through binoculars we could.

Finally, all fed and watered, they headed back into the wilderness…

13 Replies to “The Animals at Ranthambore National Park”