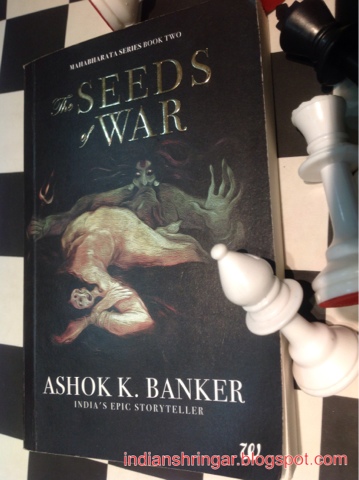 Synopsis: The Seeds of War, book Two in Ashok Banker’s “MBA” series, introduces us to the elder protagonists of the epic, as well as some of the great loves and lusts, friendships and enmities, politics and self sacrifice that will lay the seeds that will eventually fester into the mother of all wars. At first, it may seem that the journey is the reward, with seemingly unrelated love stories, fantastical tales of exploits in the heavenly realms, divine pacts and demoniac trysts. But it soon becomes evident that all these form a tapestry revealing the grandeur and glamour of the Kuru Bharata race itself, the growing descendants of the original tribe that established perhaps the greatest and oldest human civilisation ever known in recorded history. Their loves and enmities are epic, their stories astonishing, their personalities mercurial. Every page you turn reveals magical new thrills and wonders. As one larger-than-life personality strides on stage, the drama ratchets up to thriller level, the arrow swarms begin to fly and conflicts turn ugly as the author of the Ramayana Series once again proves himself the master of epics.

Who among us isn’t familiar with the Mahabharata? Most of us have heard extremely abridged versions of this great epic from our grandparents and parents and/or read the Amar Chitra Katha or other versions for kids of it. And of course, I have grown up watching the late B.R.Chopra’s version of the Mahabharata on Sunday mornings.

I admit, I am a bibliophile and reading is not just a hobby, it is quite an obsession with me. But even after reading countless novels and thrillers, several of which feature on international best stellar lists, I failed to find a novel or a story as thrilling, as compelling and as intriguing as the Mahabharata. It is a humongous tale that hides within it, countless smaller tales, romances, intrigues and dramas. From C.Rajagopalachari’s Mahabharata to Chitra Banerjee Divakaruni’s Palace of Illusions to Devdutt Patnaik’s Jaya, I have read and relished them all. So of course, when Ashok K. Banker came out with his re-telling of my favourite story, I had to read that as well.

The first book in Banker’s MBA series is The Forest Of Stories which I had got a couple of months ago (but which I haven’t reviewed yet) and The Seeds of War is the second book.

From the tragic love story of Devayani and Kacha to her marriage to King Yayati and his dalliances with Sharmishta, their five sons, and their descendants, King Shantanu and Prince Devavrata (Bhishma) Banker weaves a beautifully intricate web of words that left me totally riveted.

The description of Ganga, the Goddess as well as the river, is marvellous. Whether he’s talking of Ganga in her mortal form who captures the heart of King Shantanu and then their romance, or Ganga as the river in her various moods, or as an indulgent mother to Devavrata, his words paint a beautiful tableau in our minds. I simply loved the way he has described the childhood of Devavrata, playing with all the creatures who find home within his mother, the river Ganga.

The characters of all the Kings, Yayati, Puru, Shantanu, Bhishma are very so well depicted that we feel the emotions that they go through. I especially loved the part where Yayati has discussions with “the Righteous ones” on the concepts of Heaven and Hell, Karma etc. Banker hasn’t gone into much detail here but has given brief and simple explanations of these.

We have all read about how Bhishma “kidnaps” the three princesses, Amba, Ambika and Ambalika, for his step brother Vichitravirya. That episode and the resultant “battle” with Shalva and Amba’s feelings for Shalva and Bhishma are explained in detail, showing us a very tender side of Amba and Bhishma and the conundrum they were both caught in.

I could go on and on but then I would be giving out everything. The only thing that I didn’t like about this book was that it came to an end. Like with all good books, the hangover for this book too lasted a couple of days in which I couldn’t bring myself to start a new book and my mind was caught in the time warp of the Mahabharata.

If you are obsessed with the Mahabharata like I am, or like reading about Indian mythology, I would advise you to immediately grab The Forest of Stories and The Seeds of War. And even otherwise, these books make for a really interesting read.

Has any of you read it? Which is your favourite version of the Mahabharata?

Of course I know them all! How about you? #bolly

A soft, neutral pink look that is versatile and go

Some brushes that I recommend: * Sigma 3DHD Max K

A new day, a new week. Happy Monday everyone. #

The Career Fair 2022 organised by @dypsiworli was

The classic colour for all seasons. I love accesso

Part 2 of my @Zara fragrance haul! I liked one of

Would you dare to wear an all white outfit when th

Just a reminder to do these 3 simple, basic things