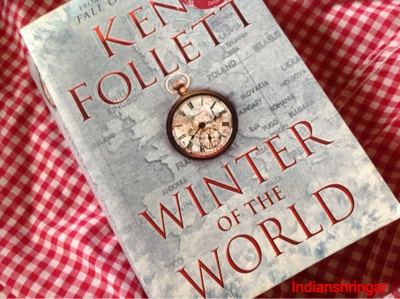 Winter Of The World is the second book in the Century Trilogy by Ken Follett, one of my favourite authors. The first book in this trilogy, Fall of Giants, spoke of five interlinked families and their destinies through the First World War. Fall of Giants concludes with mentions of the uprising “star” of Germany, Adolf Hitler. He is already at the pinnacle of his power and the world is at the brink of a massively devastating war in Winter of the World. The same five families have now expanded to include offsprings and it is their journey of love, loss and struggle chronicled in this book.

So, I finally managed to finish this huge 818-page book. I say finally because, somehow, this time it was very difficult to read this book at a stretch. People who know me will be shocked coz I’m known for my marathon reading sessions and my super-sonic reading speed (ok, I exaggerate here but yeah, I am quite a fast reader). Somehow, this time around, I found I couldn’t read about the war time atrocities and struggles etc without getting affected. Reading about all that got me feeling sad and melancholic, and so I would put this book away and pick up a cheery chick lit. I have never experienced this before though I’ve read similar kinds of books. Now, however, when I read about violence etc, I get deeply disturbed.
Anyway, coming back to the book, Follett has a knack of elaborate, detailed writing that makes you feel as though you are deeply involved in the book. Seemed people, however, might to like it and might find it a bit tedious and boring. I however, love the way he explains everything, right from the intricacies of British politics to the challenges the soldiers have to face at the front line.
Follett’s characters are very “real” and relatable. Each one has his/her own strengths and weaknesses and have their own way of dealing with situations. The mental conflict they have when they are in situations where there are no blacks or whites, only greys, make you empathise with them. The way he describes the towns, the houses, the battle field, you can actually feel like you’re there.
When you read about what each person has to go through when there is a war, how families are torn apart, the kind of torture inflicted on innocents, you can’t help but shed tears because, though this is a book, millions of people have actually been through it all. And you can’t help but wonder how a human being can do such things to fellow humans, though a lot of times they are just “following orders”.

However, I can’t help but make a comparison. Germany, at the end of the war, was literally in ruins with a worthless Reichsmark, a greatly reduced population (and whatever was left was largely women and children) and no economy to speak of. However, look at how quickly and wonderfully it rose like a Phoenix again. India won her freedom two years after that war ended. We had a much better platform to build up on than Germany had….fertile lands, tremendous natural resources, a huge population that could be a great task force…..and yet……..
Comments (5)
book review Book review Winter Of the World Ken Follett Winter Of the World book review

5 Replies to “Book Review: Winter Of The World -Ken Follett”