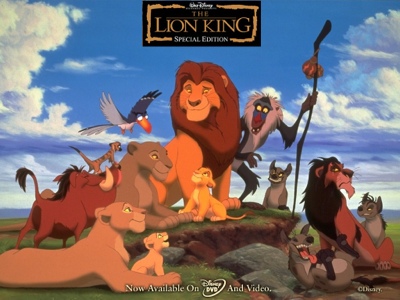 I know, this is more of a beauty blog, but like I said, Shringar, for me is anything that adds beauty to my life. And though I’m a bookworm who prefers a book over movies any day, I end up watching (and loving) almost all animated movies thanks to my boys. These beautiful movies certainly do add beauty to my life!
And all these movies have subtle messages for the kids without being to preachy. Actually, not just the kids, we adults can learn a thing or two from them too. And isn’t it fun to sometimes just escape from the daily grind into the lovely animated world of animals/toys/cars? I admit, I love animated movies and I luuuuvvvvv Disney. In fact, hubby says it was difficult to say who got more excited at Disneyland, the kids or the kids’ mom…hehehe.
Here’s a list of some of my fave movies and their messages. There are others (Rio, Madagascar etc) but here are my absolute faves (in random order).
The Lion King

This has got to be quite a universal favourite. I have yet to meet someone who doesn’t like this movie. I love the father-son bonding between Mufasa and Simba. One good parenting lesson from this movie, especially for a short-tempered person like me, is the way Mufasa explains the rights and the wrongs and his duties to Simba after Simba goes to the elephant graveyard. He didnt get angy, he didnt shout or hit, but was very patient and dignified. I hate the stampede scene in which Mufasa dies and I always forward that coz even the boys get very upset.
The portrayal of Simba’s “coming of age” and accepting his duties is also beautiful. What teens don’t have that kind of angst?  He is scared of facing Scar but he does what needs to be done for the sake of his pride (pun not intended, i mean the pride of lions). And Simba’s friends Timon and Pumba stand by him even when they are scared of taking on the hyenas.
Finding Nemo

Another movie about father-son bonding, the most important lesson that this movie holds, is not for the kids, it is for us paranoid parents who are over protective about kids so much so that we might, unintentionally, smother them and prevent their growth. I hate the start of this movie where the cute mommie fishie and the roes are eaten up by a baddie fish. And this is a kids movie!!!
The part where Nemo gets stuck in the fish tank’s pipe in the dentist’s clinic and panics….the kids learn that even in tough situations, you can find a way out if you keep a cool head.
And yes, “Trust! It’s what friends do!” says Dory to Marlon (Nemo’s dad) and that’s exactly what kids need to learn to do too.
Cars

My sons’ FAVOURITE movie (along with Cars 2) and I have watched it thousands of times! This movie tells kids the importance of team work, not to underestimate anyone, each one has their own talents so to learn from them.
And most importantly, everything happens for the best! Coz if McQueen wouldn’t have refused to change tires in the first race, there wouldn’t have been a three-way tie. Then he wouldn’t have had to go to California. If he would have let Mac sleep at night, he wouldn’t have got bumped out and chased the wrong truck and landed up in Radiator Springs…and met all his wonderful friends and girlfriend!
Toy Story

Yep, repetition. It’s all about friendship and helping out your friends in times of need.
Monsters University

Set your goals, have your dreams and work towards them. Give it all you have. Celebrate your individuality coz you have unique talents. And again, friendship and team work. I know, I’m being brief here but you get what I’m saying right?
Up

I don’t know if you’ve seen this movie which released in 2009. (we were in Paris at the time and my elder son wanted to see it though he doesn’t know French. He said “Mama you know French, you tell me what they are talking.” I finally managed to convince him that he wouldn’t enjoy that and we saw it when we came back to India.). This movie has got the most beautiful and touching love story ever! Im sure everyone, single or married, would want to have this kind of love and companionship in their lives. I still get tears in my eyes each time I see it.

You’re never to old, and its never to late, to follow your dreams and have your adventures!
Comments (6)

6 Replies to “My Favourite Animated Movies…And Their Hidden Messages.”