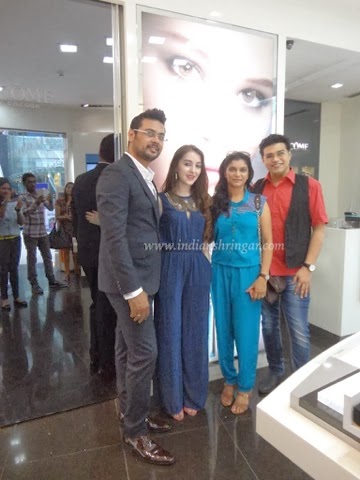 I love wearing jumpsuits as I find them very comfortable and at the same time, very chic too. They can be worn on most occasions and can also be dressed up or down depending on the accessories you choose.
Last week, I had attended the launch event for Lancôme’s Teint Visionnaire and my outfit for the day was a blue jumpsuit. You must have seen my pic in my post here. Co-incidentally, Lancôme’s product manager, Laetitia Ayache was also dressed in a…you guessed it, blue jumpsuit!

That was when I remembered that Alia Bhatt had worn a blue jumpsuit to the launch of Maybelline’s ColorShow nail polishes…..

There have been several celebrities making an appearance in blue jumpsuits recently. Have a look….
Deepika Padukone and Sonakshi Sinha.

I really looooooovvved Deepika’s jumpsuit, the wrap front, the sash all of it spells tres chic, don’t you think? Sonakshi’s polka dotted one and Sandra’s formal, high necked one are both lovely too.
I had a jumpsuit in the same style as Shushmita’s (mine was white and pink floral though) when I was four years old!
The ones I seriously detested were Sangeeta Bijlani and Gul Panang’s. Can Bijli even breath in that? And as for Gul’s outfit, it simply doesn’t appeal to me.
Which one did you like most?
Comments (21)
blue jumpsuit celebrities in blue jumpsuit fashion jumpsuit

21 Replies to “The Blue Jumpsuit : A Fashionista’s Must-Have This Season”