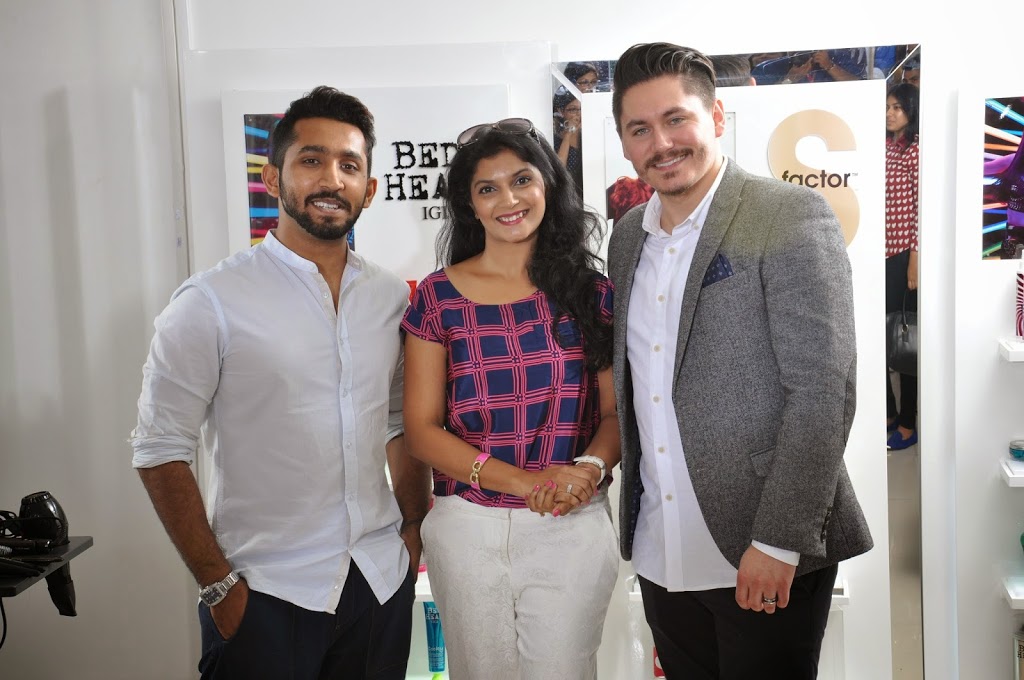 Last month, TiGi had a blogger meet where all the bloggers got to meet and interact with their Global Expert Kieron Webb who is known for his precision in cutting and exact execution of hairstyles. No, we didn’t have a cutting workshop, rather Kieron talked us through the entire range of TiGi’s products and how to optimally use them. I wish I had met him a couple of years earlier when I had bought a bottle of Small Talk on my hairstylist’s recommendation but couldn’t make it work for me. The bottle stayed in my drawer until it reached expiry date and I had to throw it out 🙁

Here are some pictures from the event….

About Kieron Webb:
The founding principle of TIGI – By Hairdressers, for Hairdressers – to work with the professional hairdresser, recognizing hairdressers for their artistry!
For the very same reason, TIGI’s Global expert, Mr. Kieron Webb was in India for the last one month and travelled across the country training fellow hairdressers & salon partners and educating them on the latest’s international styles & techniques in hairdressing.
A constant innovator in hairdressing techniques and a creative intellect, Kieron Webb is known for his precision in cutting and exact execution of hairstyles. In the last few years Kieron developed a passion for the creation of men’s hairstyles and has a specialization in this area as well.
“My aim is to take the artistry of the hairdresser and the precise execution of the barber to create men’s hairstyles for the contemporary male market. Men are now more interested in their hair, more aware of trends and happier to not only change their haircut, but also to use different products to achieve the finish they want” says Kieron. “I like to bridge the gap between the hairdresser and the barber,”

While in India, Kieron curated various looks & styles for the Indian market and hosted a number of successful trade shows & events in Mumbai. Of the many looks created, the most interesting ones were the Classic Style, The Advance Look, Barbering and the Clean Updos.
“Hairdressing tends to be creative,” says Kieron. “Hairdressers are constantly looking at ways to create different textures and finishes using classic cutting techniques and then applying advanced finishing techniques.”
In ten years, Kieron’s exciting hairdressing career has seen him visiting most countries in Europe, as well as taking him to the USA and Australia.  Beginning his career with renowned hairdresser, Trevor Sorbie, Kieron worked with Trevor and his team and also with renowned session stylist, Angelo Seminara.

Kieron then joined another esteemed hairdresser, Anthony Mascolo, and very quickly became part of the TIGI International Creative Team. During 8 years of working with Anthony Mascolo, Kieron became a respected teacher and educator, hosting seminars in the UK and abroad and teaching in the London TIGI Academy.  He also worked at hairdressing shows, exhibitions and events and participated in photographic shoots.

It was a really fun session and I got to know that my once-upon-a-time favourite shampoos and conditioners, Moisture Maniac and Control Freak were now discontinued though there were several other, even better innovations.

I asked Kieron about the sulphates in shampoos and he said that the quantity of sulphates were too minute to actually cause any damage to the hair and that a lot of research was done before launching these products into the market. He said that the “sulfate-free” shampoo phenomenon started in the USA where these shampoos were used after certain specific salon treatments like rebonding. Soon every one jumped onto the “sulfate-free shampoo” bandwagon.

I also asked him about silicones and whether they drain out the moisture from the hair in the long run and he replied that that depended on which silicones were used. TiGi uses some sort of nano particles of silicones that actually help the hair retain moisture and make it smoother and shinier.

The entire session was really informative and I wish I could have had a chance to get a hair makeover from Kieron. Maybe I’ll ask Rohit. After all we have the same surname 😉