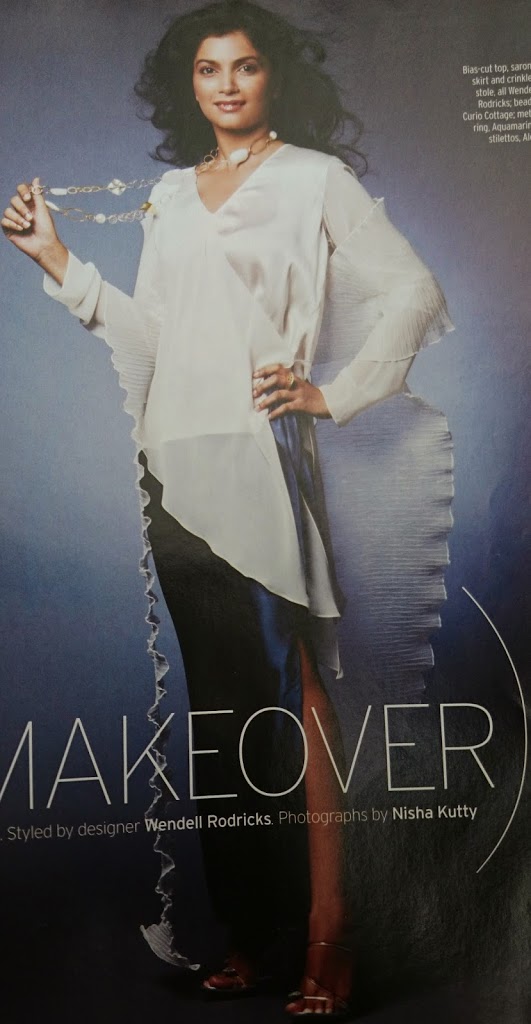 Around April or May in 2008, Marie Claire had posted about the reader makeover on their Facebook page inviting readers to send in their pictures if they wanted to be a part of it. Out of all those entries, four were finally selected for a “makeover styled by Wendell Rodricks” and to be featured in Marie Claire. Yours truly was one of those four.
You’ve seen how I hoard books. Well, the same holds true for magazines too and this morning, when I was sorting through them (kept only the Lonely Planets and Conde Nast Travellers. The Vogues, Elles, Cosmos all given away to the raddiwala), I found this June 2008 issue of Marie Claire that I have carefully preserved.
I remember the day of the shoot, I was so adamant that I wouldn’t wear anything short/ with plunging necklines coz my in-laws and relatives would all be seeing it.. Wendell wanted me to wear something really sexy because he said I had the figure for it but I refused so he said I had a “Housewife fixation”…lol.
As usual, I had kohled eyes and a light gloss when I went for the shoot. For my makeup, Wendell decided he wanted a look which would be the “total opposite of the Indian housewife”. Ergo, no kohl-rimmed eyes. All peaches and nudes. When I looked into the mirror, I felt I looked ill. Yup, I wasn’t very experimental with makeup then.
My wavy hair was put in huge heated rollers that gave it volume and definition and during the photo shoot, a huge fan was switched on for the wind-blown look.
He also made me remove my diamond jewellry and styled the look with just this beautiful long necklace and a cocktail ring.

I was so slimmmm!!! After the birth of second son, I haven’t really managed to get my weight down to what it used to be. Guess my metabolism has also slowed down with “age”…
What do you think of this look?
Comments (33)
fashion fashion makeover Wendell Rodricks