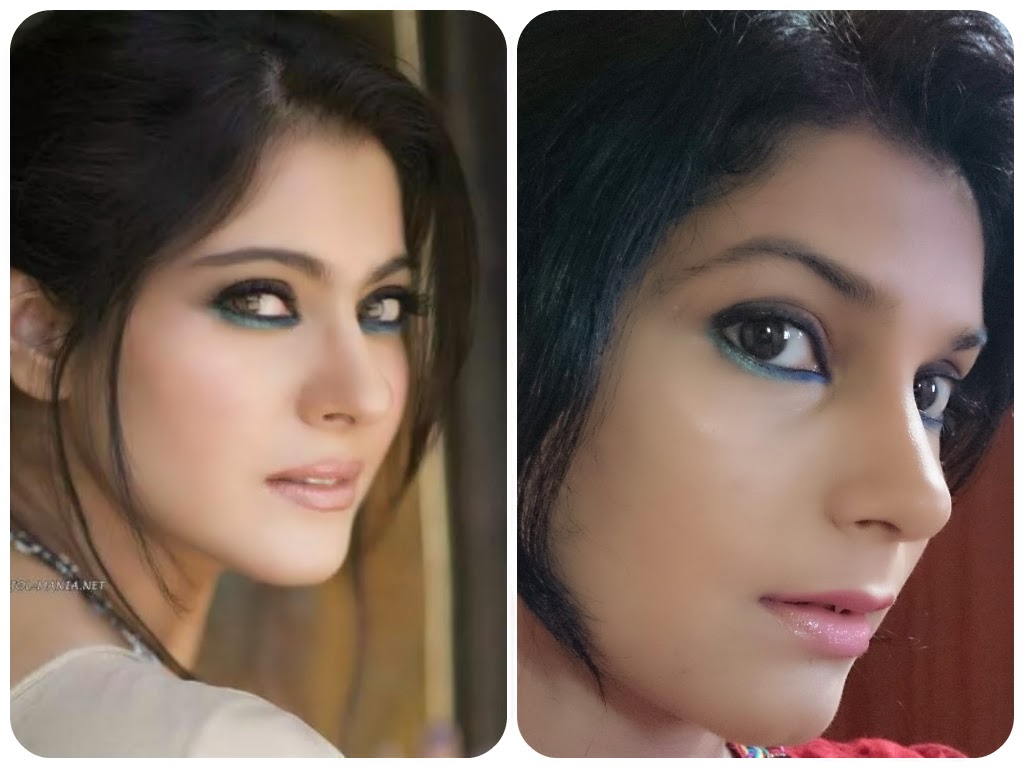 The kids had gone down to play this afternoon and I saw this picture of Kajol while browsing the internet. I immediately got out the Palladio eyeshadow quad in Blue Suede that I got in my June FabBag and did a super quick and simple EOTD. I didn’t even change my clothes nor did I iron out my bangs, which I now regret. I should have even worn my green lenses which are lying sealed ever since I bought them. But I really wanted to finish the EOTD and take pics before the hungry, sweaty kids came back home in need of a shower and dinner….

Kajol has such beautiful, expressive eyes!!! I definitely don’t know how to pose like her and it’s difficult for me to take pictures. Anyway, take a look at the pics and then I’ll tell you about the makeup I used. …

The pic above was taken in natural light while the one below has been taken in yellow light. I love how flawless my skin is looking in these pictures. I don’t know whether it’s the foundation or the lighting or the camera on my new Xperia Z2. Perhaps it’s a combination of all three.

I got the Estee Lauder foundation sample when I bought the Estee Lauder Double Wear lipstick in Stay Rose. It’s lightweight and yet gives such amazing coverage! The MAC Select MoistureCover is a recent purchase and it does a far better job with my dark circles than the MAC Studio Finish Concealer or the Revlon Photo Ready. Shall review it soon…

While the lipstick that Kajol is wearing looks fabulous, I thought a peachy pink would look nicer with this look so I went for the Lancome Rouge In Love 132M (the Asian Expertise edition).

Kajol’s makeup artist has done a gradient on her lower lash line using a dark blue in the inner one-third of the lash line and a turquoise on the outer two-thirds. Her upper eyelids have been kept slightly smoky. For the upper lids, I first applied the Maybelline Colossal Kajal and then lightly layered the shimmery gray shadow from the Palladio palette over it just to add a teeny bit of sparkle.

On the lower lids, I first applied the Colossal Kajal on my water line and then a thin line of the LA Splash eyeshadow base (again a product I received in my FabBag) under the lashes. Using the eyeliner brush that comes with Maybelline Gel Liner, I applied the navy blue shadow starting from the inner corner till about one-third way out. Then I applied the turquoise shade on the rest of the lower lash line blending well where the two colours met. And that’s it! I even forgot to put on mascara, I was in such a hurry.

The eyeshadows in the Palladio quad have are quite pigmented. They have a soft, buttery texture and barely any fallout, except for the gray shade which does have a little bit of fallout. There’s Jojoba oil, Shea Butter, Apricot Oil, Matricaria flower extract, Ginko Biloba extract, Ginseng root extract and Aloe leaf juice among other ingredients. And NO Parabens.

While the pigmentation of the shadows is really nice, layering them over a primer really makes the colour “pop”. I don’t use primers, neither for the face nor for the eyes, but I really wanted to try out the LA Splash eyeshadow base and I must say I’m a convert. Yes, eyeshadows layered over primers really do look much nicer.

No, I haven’t done any “soft focus” or any other retouching of the pictures (except cropping them). Can you believe these are mobile phone pics? And no, I didn’t use the 20MP rear camera either, I used the front camera for these selfies. It’s as though Sony has an inbuilt soft-focus/blur for selfie-addicts…lol.

How many of you got the Palladio shadows in your FabBag? What do you think of this look? Very wearable I feel. And for the first time, I actually like the blue eyeshadows.