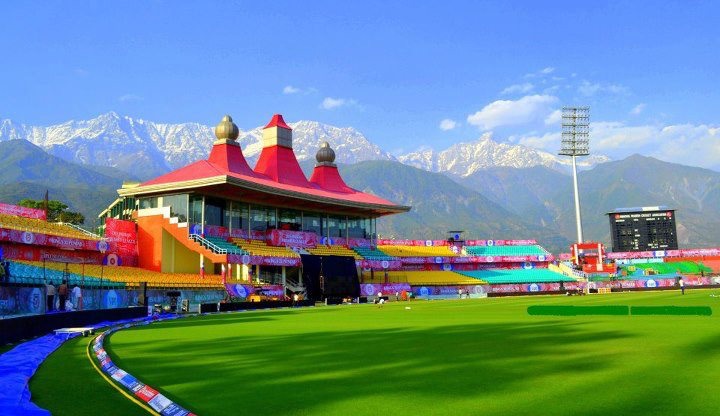 Me (during one of the IPL matches) : What a beautiful place this is. Where is this match being played?

Me: It is absolutely beautiful….look at those gorgeous snow clad mountains. They make such a stunning backdrop to the colourful stadium!

Hubby: Ok, I’ll take you there. Now let me watch the match….

Hubby has always had a long list of destinations where he’d like to go to watch cricket matches. I personally, am not too fond of cricket and sitting in a hot, sweaty stadium isn’t my idea of fun. But travelling to beautiful destinations, exploring the local markets and cafes while hubby and kids watch the match in the stadium? Now that’s right up my alley. So which are the cricket holiday destinations on my travel wishlist? Read on…..

India is probably the only country which has enough stadiums to host a Would Cup alone (I might be wrong,  do correct me if I am). The vast and geographically diverse Indian sub-continent is a great destination for travellers wanting to combine sports (well, mainly cricket) with tourism. From urban cities to desert towns to the beautiful mountains, cricket stadiums are everywhere! Besides the wonderful Wankhede and D.Y.Patil in my own city, there are enough in India to write a whole post on. The one stadium I would love to visit is….

If I had to list out the most beautiful cricket stadiums in the world, the stadium at Dharamshala. Just look at this picture. What a colourful stadium! And the view of the majestic snow-clad mountains is simply magnificent! While my men are watching the match,  I can indulge in some retail therapy for Tibetan handicrafts and jewellery.

Once the match is over, there are several other things to see and do in and around Dharamsha.  For the adventurous, there are several trekking trails from easy walks for beginners to challenging trails for the professional trekkers. And of course, para-gliding for the thrill seekers (like me).

Besides temples, monasteries and stupas, there are museums, art galleries and libraries for a more cultural experience. Dharamshala also has yoga institutes,  reiki classes and meditation centres for those seeking to reconnect with their spiritual side.

This is the #1 destination on hubby’s cricket wishlist. Sun, sea, surf….And cricket. What more would a guy want? The laid back, laissez-faire way of life in the Caribbean islands and the plethora of things to do make these an ideal holiday destination.  And being so relaxed makes watching a match even more pleasurable. Barbados, Jamaica, St. Kitts, Grenada all have lovely stadiums but one stadium that deserves a mention here is…

Just look at this ground!!! A Chris Gayle sixer or M.S.Dhoni’s helicopter shot would probably send the ball deep-sea diving! And people like me, who aren’t too interested in the happenings on the pitch, can soak in the sun and drink in the sea views while the match is on.

Besides swimming and surfing, there’s so much to do in the Caribbean islands that a month would fly by before you even realise it. Your sports enthusiastic brats can also go for free football and cricket camps in Barbados. From  diving with the sharks and swimming with the Dolphins in the Bahamas to bird watching in Trinidad, to watching rum being made in Grenada, this is the stuff perfect holidays are made of!

The birthplace of modern day cricket, England would actually top the travel bucket lists of most cricket enthusiasts. Manchester, Old Trafford, Trentbridge, besides being cricketing grounds, are also slices of history. They are steeped in old world charm and transport you to a world of high-tea and scones. Can any talk of England be complete without a mention of ….

The Mecca of the cricketing world, the venue where a proud Indian team lifted the World Cup for the first tme in 1983, this is the temple that all cricket worshippers wish to make a pilgrimage to. Every child who ever goes to cricket class, dreams at least once of someday perhaps, becoming a cricketer and playing at Lords.

England is also a fabulous travel destination, and one that is really high up on my travel wish list. From the Tower of England, the Big Ben, the London Eye, the Buckingham Palace to the Stonehenge to Bath, there’s a whole lot of things for the “tourist”. And of course, the Harry Potter tour that even my son is eager to do along with me.

This beautiful nation has it’s fair share of lovely cricket stadiums from Durban to Johannesburg to Cape Town.

The Table Mountain forms a beautiful backdrop to this cricket stadium and a ride up to the top in the cable car would be higher on my priority than a cricket match. But with three cricket-crazy boys, my minority opinion wouldn’t count.

South Africa is synonymous with wildlife safaris and no trip to this country would be complete without experiencing the beautiful beasts in their natural habitat. South Africa also offers loads to the thrill seekers like diving with the White sharks, kayaking with crocodiles, exploring the caves along the Congo…it’s like your customised version of Who Dares Wins!

And last, but certainly not the least, is the destination where the World Cup 2015 is under way. If you’ve read my “Wanderlust Tag” post, then you would know that hubby and I are truly eager to take the boys to Australia. In fact, son was very eager to go there for the World Cup but unfortunately, schools are on so it just wasn’t possible.

From Sydney Cricket Ground to WAKA to Adelaide to Wellington to Auckland, Australia and New Zealand are a cricket lover’s delight. I have fond memories of …

Hubby and I had taken a tour of the MCG during our honeymoon and since then, he’s wanted to come here with our kids to watch a match. This is the statue of cricketing legend, Sir Don Bradman at the MCG. Cricket apart, we also want to take them for a drive along the Great Ocean Road, show them the Crown Entertainment Complex, Rialto Towers, Federation Square, Flinders Street Station…

Australia is a perfect family holiday destination, especially the North-East part of it with the Great Barrier Reef at Cairns and all the theme parks and beaches at Gold Coast. New Zealand is perfect for adventure sports enthusiasts and those with slightly older kids because then they would be able to really enjoy all the stuff.

Whew! Who would have thought that a person who doesn’t really enjoy cricket would write such a huge long post related to it??? But now that I’ve written it, I simply want to pack my bags and take off. Well, let me start planning my summer holidays.

Are you a cricket fan? Which would be your favourite cricket holiday destination?

3 Replies to “Cricket Holiday Destinations on My Travel Wishlist”