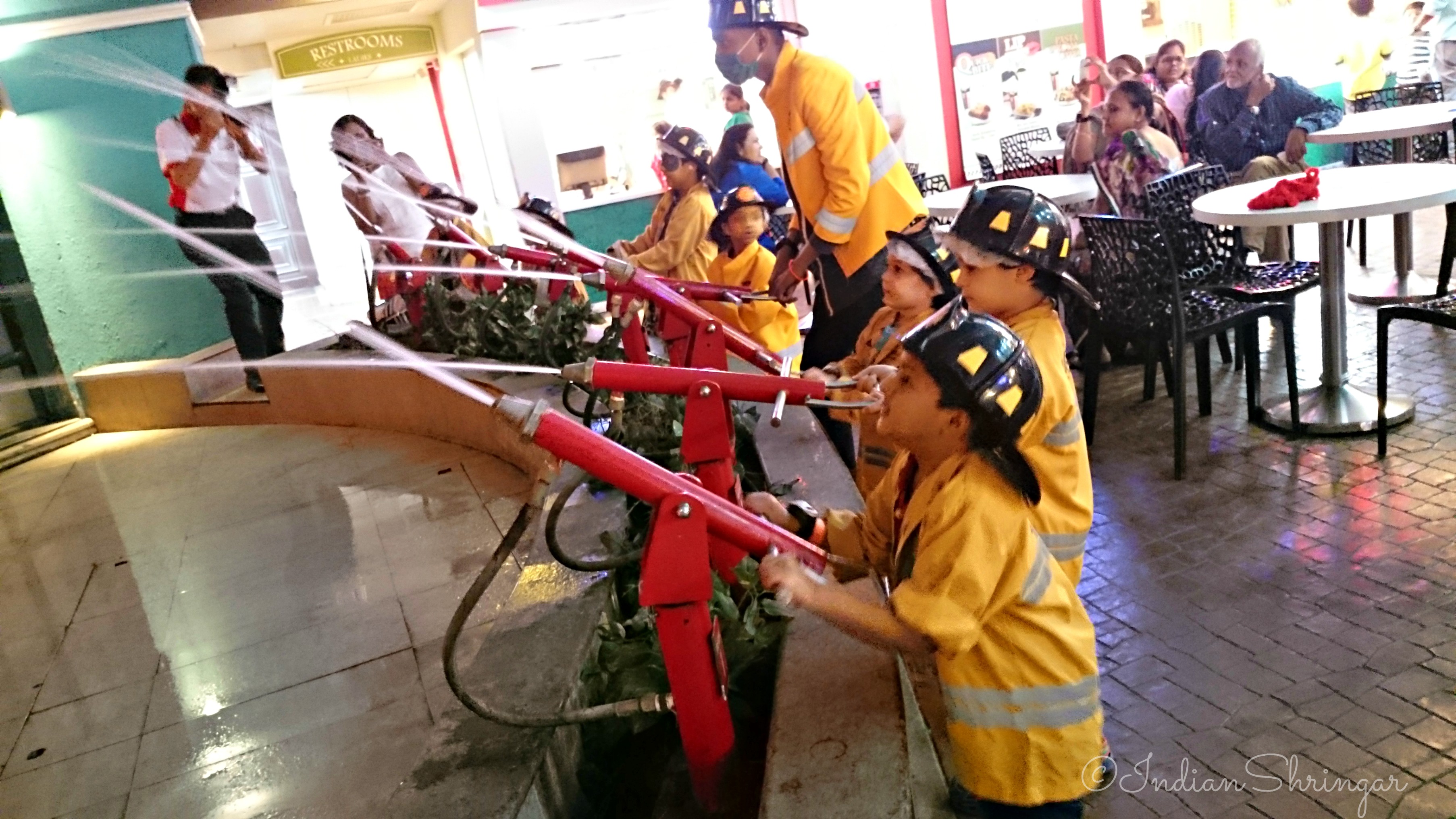 Imagine a 75,000 square feet space with cafes, driving school, cornflakes factory, driving academy, fire station, bank, dentist, hospital and a whole horde of other establishments that you see in a city. Except that these cater to the junior citizens. I’m talking about Kidzania Mumbai, part of the Mexico based wonderland for children where they learn through role play while earning and spending Kidzos, the currency of Kidzania. Despite having been there several times, my boys are ever ready for a trip to Kidzania; and I say trip since it is situated in R-City Mall, Ghatkopar, a long drive from South Mumbai.

You can choose either the morning slot or the afternoon slot to visit Kidzania. The ticket counters resemble the check-in counters at the airports and there are intermittent announcements of the “boarding” of the Air Kidzania flight. The children are given the boarding passes and all the members of the family/group are given bracelets that are tagged together (more on those later). Kids are also given a cheque of 50 kidzos – the currency of Kidzania – that they can encash at the bank to get kidzos in cash.

The activities at Kidzania are of two kinds, one, where the children pay to do the task (fire-fighting, chocolate factory, driving, cornflakes factory etc) or they earn money for doing the tasks (dabbawala, courier company, police, construction etc). For toddlers under the age of four, the activities are restricted to about 20 odd things and the first time I took the boys to Kidzania, my younger son howled since he couldn’t “drive the car like his Bhai could”. For older kids, this place is super duper fun and one day at Kidzania just isn’t enough for them to do everything that they want to.

The first time that you visit Kidzania, you’ll find yourself running behind the kids as they dart from one activity to the other. In our case, hubby ran behind elder son and his friends (we were celebrating his birthday there) while I took younger son for all the toddler activities. The subsequent visits have been better since we just need to keep an eye on the younger one while the older one has his activities charted out and knows exactly what he wants to do. Both, however, always prefer to start with the “pilot training course” in the flight simulator followed by being fire-fighters and putting out the “fire” with real water hoses.

If your children have their activities figured out and are old enough to not need supervision, you can have some mature conversation with your spouse at the Adults only lounge on the mezzanine which also has a spa (which I haven’t been able to check out yet). Or you could have a cup of coffee or some snacks on the ground floor as you see the children rushing about.

Security is really tight at Kidzania and that is one thing that has impressed me the most. At the time of check-in, each person in the group/family is given a security bracelet that can only be removed by the staff at the time of exit. The bracelets of all the members of the group are tagged together in the system so a child cannot be taken out from there unless accompanied by at least one adult in that group. So there is no risk of your child being whisked away by strangers pretending that he/she is part of their group. Also, if you the kids are doing the activities on their own and you want to gather them for lunch etc, you can scan your bracelet at a special screen and it will show you the locations of the others (children and adults) in your group.

Just like with other theme parks, at Kidzania too, you have photographers taking pictures of the kids as they perform the activities, which you can then purchase at the photo booth. You also have the option of hiring a photographer who will take pictures exclusively of your children. There are other Kidzania accessories available for purchase as well if you want to take back some souvenir of your trip.

The staff at Kidzania is well trained, efficient and friendly and do not give in to kiddie tantrums which is a very good thing. The make the children feel like young adults while helping them out when needed and are quite patient too.

Kidzania is truly a wonderful place and I find myself wishing that I were a child so that I too could participate in some of those fun activities. One trip here is never going to be enough; when you leave your kids will ask you “Mom, when are we coming next to Kidzania?” So, whether you live in Mumbai or are visiting this Maximum City, if you have children, you must bring them to Kidzania. Trust me, they will love it!

PS – There are loads of other things for kids to do in Mumbai. Let me know if you’d like me to do posts on those.

2 Replies to “Learn While You Play At Kidzania Mumbai”