“I don’t understand this thing about us humans – we send our cars for regular maintenance servicing and yet, we never think of servicing our own bodies – the most complex machine of them all.” Jayant Bokadia, the man whose brainchild is Nimba Nature Cure Village, told me that one of the guests who stayed there had made this statement. 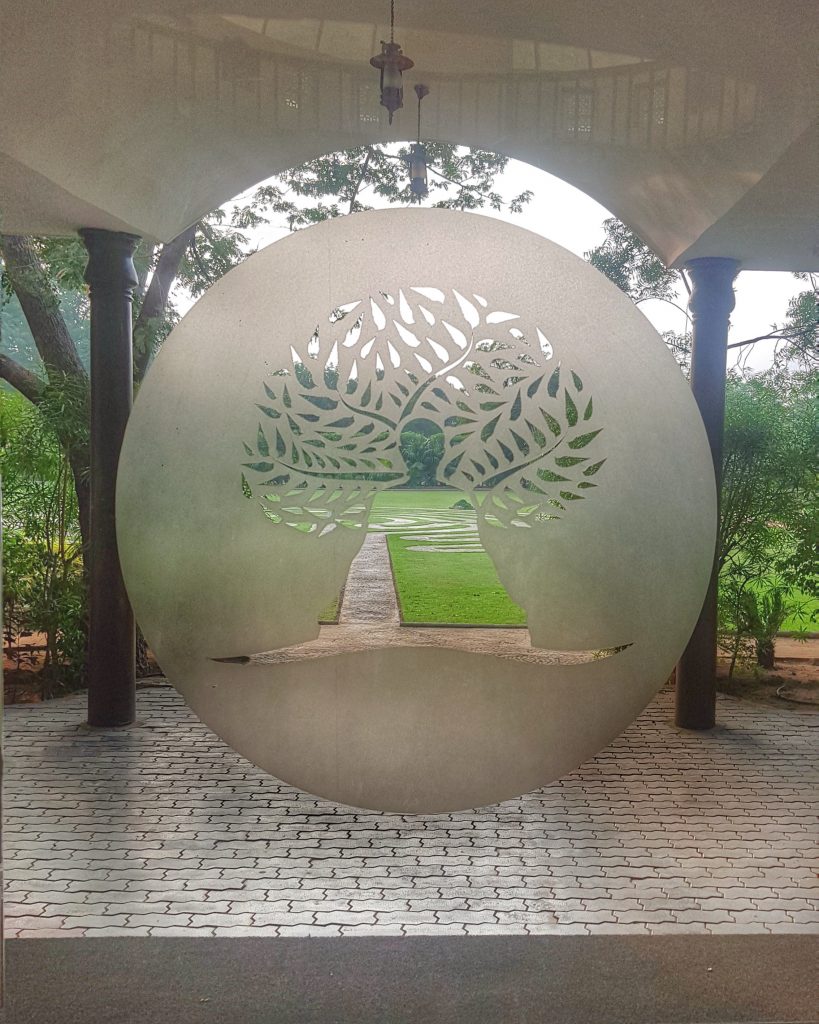 And’s it’s true too. Our bodies bear the brunt of our unhealthy food habits and hectic lifestyles and yet, we never bother to take time out for a little “body servicing” till it protests in the form of illness and disease. The last four months were an extremely stressful time for me due to my mother-in-law’s hospitalisation etc, and while I was managing everything as best as I could, my body was reacting to the stress in the form of migraines, acidity, bloating and breathlessness.  So when I was invited to visit and experience the Nimba Nature Cure Village in Gujarat, it seemed like the universe was giving me just what my body needed. 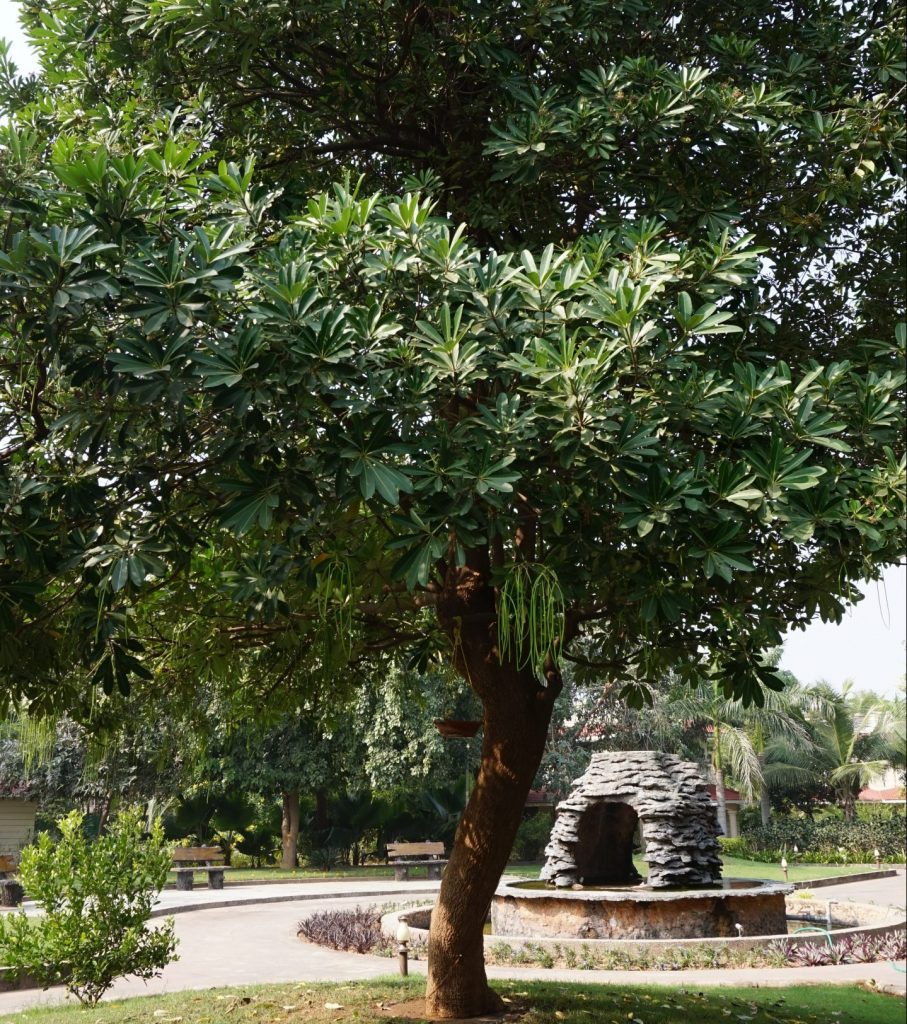 “Situated about an hour away from Ahmedabad in Gujarat, ‘NIMBA’ – one of India’s largest Naturopathy centres –  has its roots in the ancient Indian scriptures, ‘Nimbati Syasthyamdadati’ which means ‘to give good health’. The Nimba Nature Cure Village offers physical, psychological and spiritual health overhaul, with the help of the power of the nature. At Nimba, you can benefit from the distinctive synergism between modern science, traditional practices and ancient wisdom; with professional guidance. It also offers you the chance to revive the crucial equilibrium of the five basic elements of life: Earth, Water, Air, Fire, and Ether. Here, you can treat these elements, also known as ‘Panch Mahabhoota’, bringing them back to normalcy, thereby restoring the optimum health of your body. Besides Ayurveda and other traditional Indian therapies like Yoga and Meditation, Nimba also offers other alternative therapies such as Acupuncture, Cupping and Music Therapy among others and helps in treating a host of illnesses.”

From the moment you enter the gates of Nimba and see the serene Buddha statue, you feel yourself relaxing. There is abundant flora in the retreat which are home to a variety of birds and animals such as squirrels and monkeys (though, I didn’t see any monkeys during my stay there). Nimba has it’s own organic farms where they organically grow a large number of vegetables such as lady finger, tomatoes, bottle gourd, bitter gourd, coriander and others. A large portion of the meals cooked in their kitchen use these organic vegetables.

Nimba also has a quaint Meditation Cave as well as an amphitheater where, sometimes, talks and performances are held for the guests staying there. A beautiful Nakshatra Garden with a reflexology maze and a little “play area” with swings and wind chimes hanging from the branches of the tree are other unique features of this beautiful retreat. Not to mention the two waterfalls that are turned on at evening and early morning whose sound combines with the chants played on the speakers to add to the spiritual ambiance of the retreat. There are also two cute Gazebos at Nimba Nature Cure Village which are a great place to catch up with your social media as the gazebos along with the Library are the only places where wifi is available. 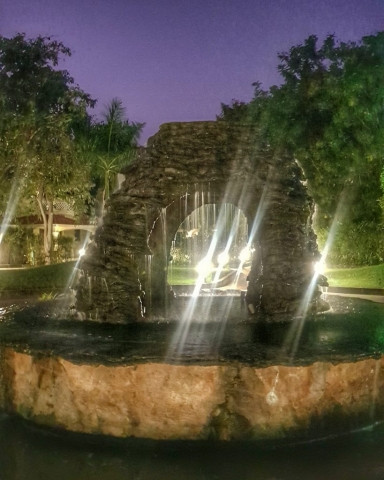 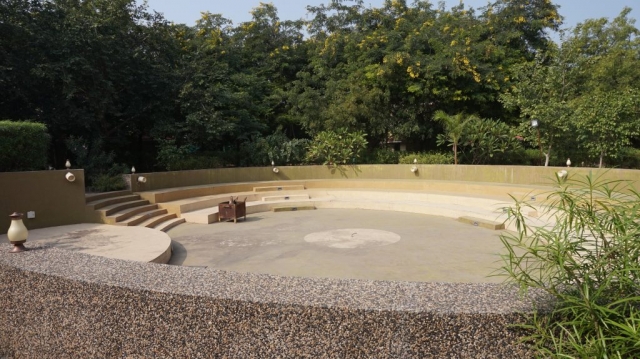 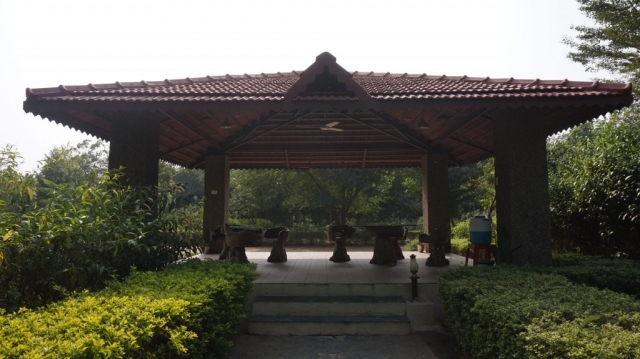 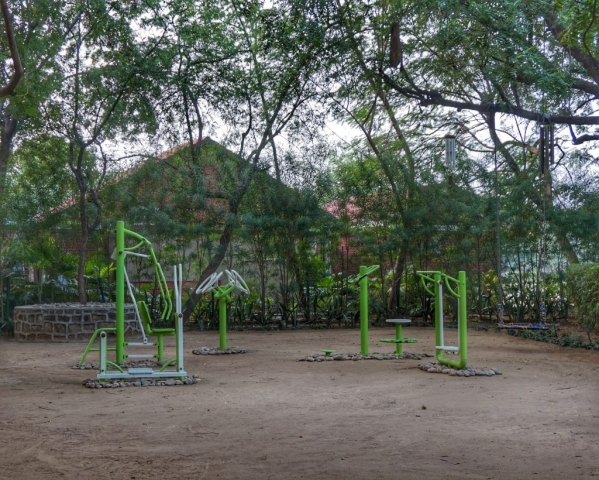 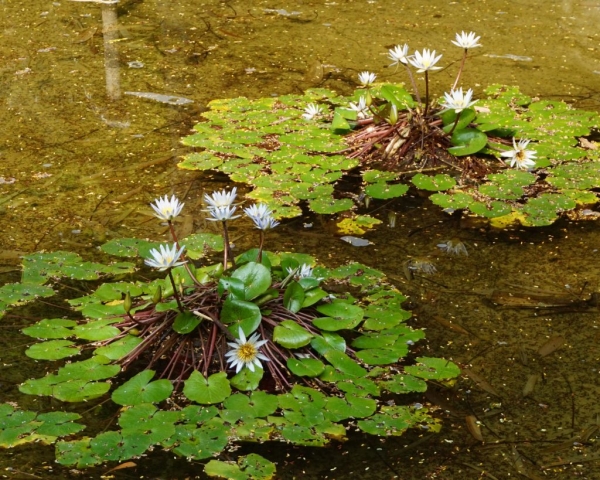 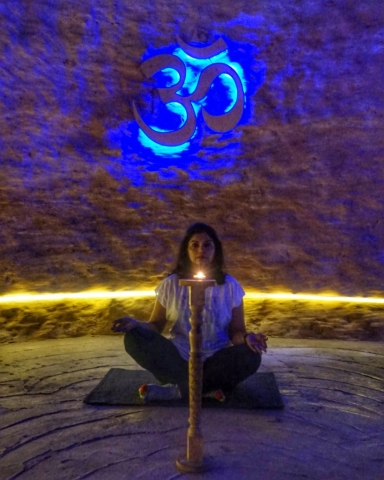 A Day At Nimba

At Nimba, the day starts at 4:45am to the sound of chants that are played through out the retreat and the room at a soft volume on speakers. That, along with the chirping of the birds is actually quite a nice way to wake up despite being so early in the morning. 5am – 5:30 am is time for a walk. With so many trees all around and a cool breeze blowing, sound of the water at the waterfall, the birds and the chants, a “morning walk” becomes quite a spiritual experience (check out my Nimba story highlights on Instagram for videos). Once the walk is done, you head for the Shatkriyas  – cleansing of the throat, nose and eyes – which is followed by an hour of yoga. Then, you’re given a shot of grass juice / herbal detox drink, then 15 minutes of Hydro Reflex walking and finally, at around 7:30, you head for breakfast! (Note – you’re up since 4:45 and the first meal you have is nearly 3 hours after that. More on the meals later in this post).

From about 8am to 12:30pm is the time for various doctor consultations / therapies / massages depending on your the doctor’s prescription. This is followed by lunch after which you have around half an hour of rest before heading off for another round of holistic therapies. At 5:30pm, there’s some more yoga (power/ aqua / chair) or aerobics or zumba followed by meditation and an interactive wellness talk. Dinner is finally served at 7:30 pm. Bedtime at Nimba is 10pm.

If you have followed my stories from my stay at Nimba, you would know that my day was absolutely packed with back-to-back therapies / activities. Being a wellness retreat, I would have certainly preferred a more leisurely schedule considering we have hectic schedules at home anyway. However, I was told later that the reason my schedule was so full was because the Nimba team wanted me to experience everything that Nimba has to offer.

I have to say, the therapies I experienced at Nimba have been THE BEST among all the massages I have had anywhere in all these years whether it was at a luxury spa or an ayurvedic health care center. The Potli massage and Udvartanam that Dr. Shyam (the CMO at Nimba) had prescribed for me were simply AMAZING and all three of my therapists were outstanding! It is said that when you have had a very effective massage treatment, your body flushes out toxins after a couple of days. This is usually in the form of a low fever. On my return from Nimba, I did get fever that lasted for just a day after which I was absolutely fine! The treatment rooms at Nimba are much more spacious than their accommodation rooms and each room has it’s own steam cabin – the little one in which you sit on a stool with your neck and head sticking out – as well as a bathroom.

Udvartanam and Potli massage are just two of the Ayurvedic therapies that Nimba offers. Others include Abhyangam, Shirodhara, Patra Pind Swedan, Pizhichil and Panchakarma. Besides Ayurvedic therapies, there are a host of other therapies such as Hydro therapy, Colon Hydrotherapy, Vibro Massage, Ultrasound, Current Therapy, Heat Therapy, Cupping Therapy, Raga (music) therapy and Acupuncture.

At Nimba, they offer different variations in Yoga and Meditation too. Besides the normal yoga, they have sessions of Aqua Yoga, Power Yoga, Chair Yoga, Couple Yoga etc and chakra meditation, Tratak meditation, cave meditation etc.

Accommodation and food are the two areas at Nimba where I feel there is major scope for improvement. Cute cottages are scattered all through the resort and each cottage comprises of 3 individual rooms and a common sitting area. Each cottage us quite secluded and surrounded by beautiful trees and plants. As lovely as the cottages look from outside, from within, they are really small. While the interiors of the room are very basic, they are clean though the decor does need some revamping (peeling wall-paper, chipped tiles etc). I was given a room on the upper floor which had two balconies and ample of natural sunlight coming through, however, the rooms on the ground floor were quite gloomy and tiny. I was truly glad for the balconies and the flowering trees outside (see my stories for more) because they gave me a bit more space and let me feel connected with nature.

The one thing that I really appreciated about Nimba is that there was a steel water jug in each room. No single-use plastic water bottles here so kudos to Nimba for that.

At Nimba, all the dishes are prepared without oil, ghee, sugar and chilies. The menus are curated for 14 days which means that no item is repeated for breakfast, lunch or dinner for 14 days. To flavour the food, they use salt, pepper, cloves, cardamom etc, even a bit of ginger at times. The food was laid out buffet style and each person was served small quantities which is a good way to prevent wastage of food. They are extremely strict about not permitting toxic substances such as coffee, alcohol and drugs.

While the food was flavourful (especially some of the soups), it was extremely dry and I had to struggle to get it down my throat. I might be wrong, but my understanding is that Ayurveda actually advocates the use of cold pressed (kachi ghani) oils and ghee and believes that the human body NEEDS a certain amount of fats to keep the joints well lubricated. Also, at Nimba, they serve absolutely no dessert – not even those made with grains and sweeteners such as jaggery or honey – which again is contrary to Ayurvedic principles which states that a well-balanced meal is one that has all the 6 flavours – sweet, sour, salty, pungent/spicy, bitter and astringent.

Breakfast at Nimba is served around 7:30 am – nearly three hours after you’ve woken up at 4:45am – and comprises of herbal tea and a bowl of fruit. They also have one more breakfast item each day, usually something dry like Muthia which I had one piece of on my first morning there, but on the other two mornings, I was only given a bowl of fruit. I believe that breakfast has to be wholesome and filling, especially if you’ve woken up so early and have put your body through a rigorous morning walk and a tough session of yoga! Just a bowl of fruits simply isn’t adequate! There is no mid-morning snack either, though when I mentioned this to them, they said that I should have mentioned that I have a habit of snacking and that they would have given me an extra fruit to munch on!

The next meal, lunch, is around 12:30 after which there is a huge gap till dinner which is served around 7:30pm. While the website as well as the schedule given to me mentioned herbal tea and energy snack at 4:30pm, no snack was served on either of the 3 days that I was there. Herbal tea was given when I asked for it but since it’s just green tea, it certainly doesn’t keep you full till dinner time. I personally feel that such long gaps aren’t good for health, especially since I had mentioned to the doctor about my acidity issues during the consultation.

To Sum It Up 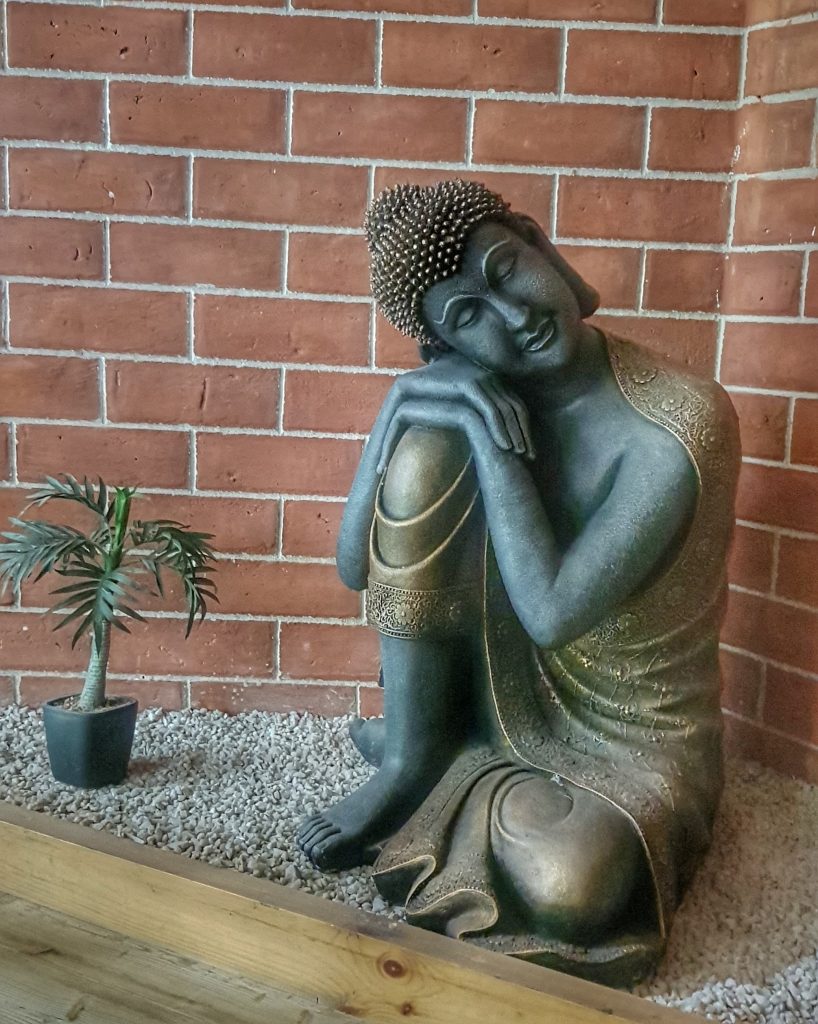 My three days at Nimba did my health a lot of good – though difficult, I did manage to give up coffee which was one of the culprits aggravating my acidity. I certainly enjoyed getting up early, walking around the resort amidst the trees and the chants, the yoga the meditation and most of all, the massage therapies which were simply FABULOUS. I just wish they would spruce up the accommodations and tweak the food and meal timings a bit. Other than those two minor issues, Nimba is certainly a good place to visit if you’re seeking a detox or need a wellness retreat.

3 Replies to “My Experience At The Nimba Nature Cure Village”

Day 11 of #30DaysOfBeauty and I have a massive PMS

It's #FirstImpressions for Day 10 of #30DaysOfBeau

An awesome new mascara for Day 9 of #30DaysOfBeaut

One of my favourite facial oils for Day 8 of #30Da

Sunday Pampering on Day 7 of #30DaysOfBeauty with

Day 4 of #30DaysOfBeauty and this is a blush I loo

Day 3 of #30DaysOfBeauty ! NO MAKEUP NO FILTER her

Day 2 of #30DaysOfBeauty and today I have quite an