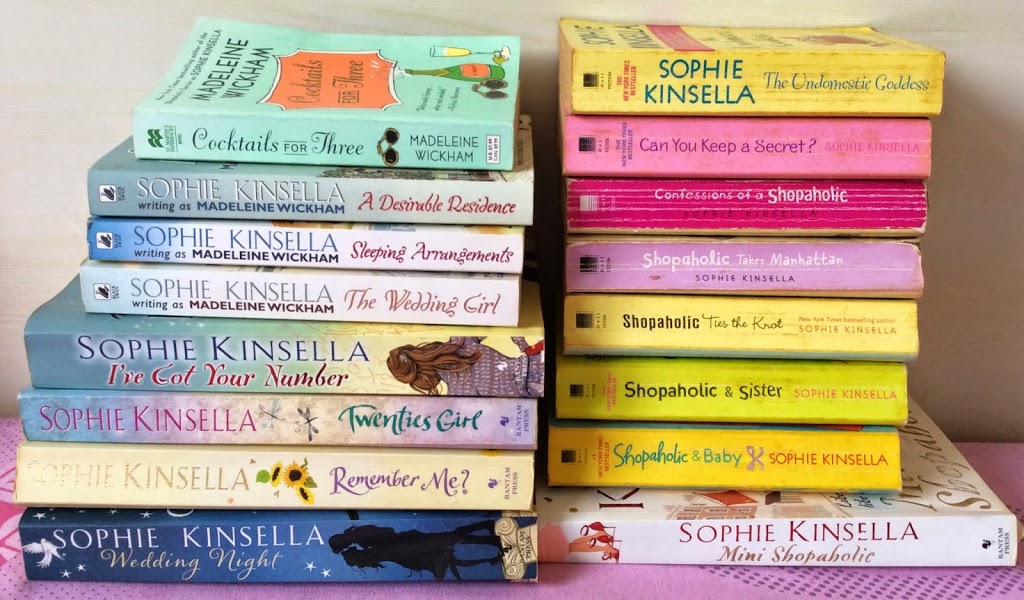 Now that elder son is 8, I wanted to get him started on Harry Potter. He’s already read some titles from Enid Blyton, like the Secret Seven, The Wishing Chair, Magic Faraway Tree and I thought that Rowling’s combination of mystery + boarding school + magic would appeal to him enough to make him put down the Geronimo Stiltons that he’s obsessed with these days. I couldn’t find the Harry Potter and the Philosopher’s Stone in his book cabinet so I decided to hunt for it in my little “library”.
And that’s how “Operation Book Organisation” started. The entire tuesday morning went in removing, dusting, sorting out, re-arranging and stashing my books. I also took a few pics and tried to list down how many of my books were “missing” (too many to even remember). So, here’s my book collection. I couldn’t decide which category to start with so I’m putting them in order of “lightness”, light, fluffy chick lit first and heavy-duty weaponry-loaded thrillers and espionages last in international authors. Then, the same way, with Indian authors. While typing this out, I have realised that this is going to be one loooooong post so I’ll do it in two parts. Here’s part 1…..
CHICK LIT

My current favourite Chick Lit author, Sophie Kinsella (though her latest one, Wedding Night was quite a disappointment. Read my review here), the Shopaholic series and Twenties Girl are my favourites. Though again, I was quite irritated with Becky in Mini Shopaholic for the way she handles the house situation. Anyway,  I’m eagerly awaiting the latest in the Shopaholic series, “Shopaholic To The Stars” and I hope that Becky’s character improves a bit. Well, we’ll find out in autumn…

From Bridget Jones’ Diary to The Devil Wears Prada (the only book where I liked the movie better than the book) to Lipstick Jungle, I love my chick lit books. Most of the authors, as you can see are British with a few American ones too. I guess I prefer the British sense of humour. I go through phases where I read one chick lit after another for months, and then suddenly will move on to historical fiction for a couple of months or thrillers. Anyone else experience this??
While Harold Robbins and Jackie Collins don’t really come under chick lit (they can be called pulp fiction I guess), I have included them here.
COURTROOM DRAMA

John Grisham’s books are so gripping and engaging, even though one might know nothing about law. One of my favourite Grisham’s is The Partner, which, unfortunately, is missing from my collection. Mark Gimenez can truly be called the next Grisham because he has an almost identical style of writing. I loved both his books.  I love re-reading my books, months or even years after I’ve first read them, which is why I like to buy, and then hoard, the books rather than borrow from a library. I simply hate it when my books go missing (read borrowed and then not returned)…The Rainmaker is another one that’s gone missing.
HISTORICAL FICTION

While some of Ken Follett’s books do fall under the Thriller category, I thought it would be better to classify them as Historical Fiction. Because even those thrillers like Code To Zero and Jackdaws are based in the past, albeit, recent past like the 1940s and 1960s. The Eye of The Needle and The Day of the Jackal are the ones that are missing along with others but I can’t remember which ones 🙁

Another author who’s books I love reading, Jeffrey Archer’s books can’t truly be classified into any one particular genre but I guess Historical Fiction is the right category. The first Archer I read was Kane and Able (missing) and I was hooked. This was followed by Shall We Tell The President and Not A Penny More Not A Penny Less (both missing) and has continued right upto his latest installment of the Clifton Chronicles, Be Careful What You Wish For.

THRILLERS
One of my absolute favourite genres, I love reading thrillers, mysteries, espionages….all of it. Thrillers is quite a big umbrella to bunch all of these under, but I have tried to keep espionages and mythological thrillers in a separate category.

Matthew Reilly is an Australian author and his books are absolutely loaded with high-tech weapons and instruments. There is gory violence in his book too, which never affected me earlier but disturbs me a lot now. The first Matthew Reilly book I read was Temple, which has gone missing, and was given to me by my uncle. Then I moved on to Scarecrow, Ice Station (missing), Seven Ancient Wonders. I’m waiting for the next installment of the “Number Series” as I like to call it, the book after Five Greatest Warriors, to be launched. Yes, there will be violence and yes, I will read it.

It was The Da Vinci Code that got me hooked onto Dan Brown as I’m sure it did for millions around the world. Digital Fortress is also a fantastic book. Angels and Demons and The Lost Symbol were slightly disappointing though.

Here’s another master story teller who keeps the reader engaged. Frederick Forsyth’s The Afghan is my favourite and I still cry at the end, even though I have read the book countless times. A couple of books missing here too. Still trying to remember which ones.

No, I haven’t seen the movie The Bourne Identity and I don’t even want to. I don’t want to spoil the image of Jason Bourne that I have in my mind. I made that mistake with Mario Puzo’s The Godfather and I’m not going to repeat that. Several of Robert Ludlum’s books are based during the time of the Second World War, The Tristan Betrayal being one of them. The Bourne Identity and The Bourne Ultimatum are both missing….

I think I was in the 10th standard when I started reading Sidney Sheldon. I think I’ve read almost all of his books and he’s probably one of the most borrowed (and hence unreturned) authors in my collection. My favourite from this author, If Tomorrow Comes, is….you guessed it…missing 🙁
INTERNATIONAL ESPIONAGE

Just as with Matthew Reilly, I was introduced to Tom Clancy by my uncle with Debt Of Honour (missing) and I fell in love with the character of Jack Ryan. A couple of years after I read this book, 9/11 happened. For those who don’t know what I mean, in Debt of Honour, a Japanese pilot flies a commercial aircraft (without passengers) into the Capitol. The Sum Of All Fears is another fabulous book by him (again missing).  He was a master of International espionage, politics and weaponry and his narrative is very detailed. By the way, the really worn out, tattered book is Patriot Games and the book on top of the pile is the French version of The Teeth Of The Tiger. Yes, I used to read French novels too when I was as fluent in French as in English. Of course, it’s become a bit rusty now…

These are some other books that could fall into the Thriller category. Well, perhaps not Life Of Pi, but then I couldn’t figure out where to put it. I had a couple more of Arthur Haileys, Airport and Hotel, both of which have done the disappearing act. Somehow, I just can’t bring myself to reach even halfway with The Girl With The Dragon Tattoo. I don’t know why but that book fails to hold my attention. Same with Gorky Park and Nightwing by Martin Cruz Smith.  Steve Alten’s Mayan Prophecy is a really nice book and I want to buy it’s sequel.
Well, I think that’s quite enough for part 1. What do you think of my book collection? I had loads of books in my cupboard at mom’s house but unfortunately, they got destroyed when there was a termite attack.
Is there any book that you’d like me to review? While I love makeup, shopping, travelling, I’ve always been super passionate about books and there have been times when mom used to get livid because I was so engrossed in the book in hand.
Anyway. I hope you enjoyed this post. Part 2 shall be up soon…..stay tuned.
Comments (13)
book collection books chick lit fiction mythology romance sci-fi thriller