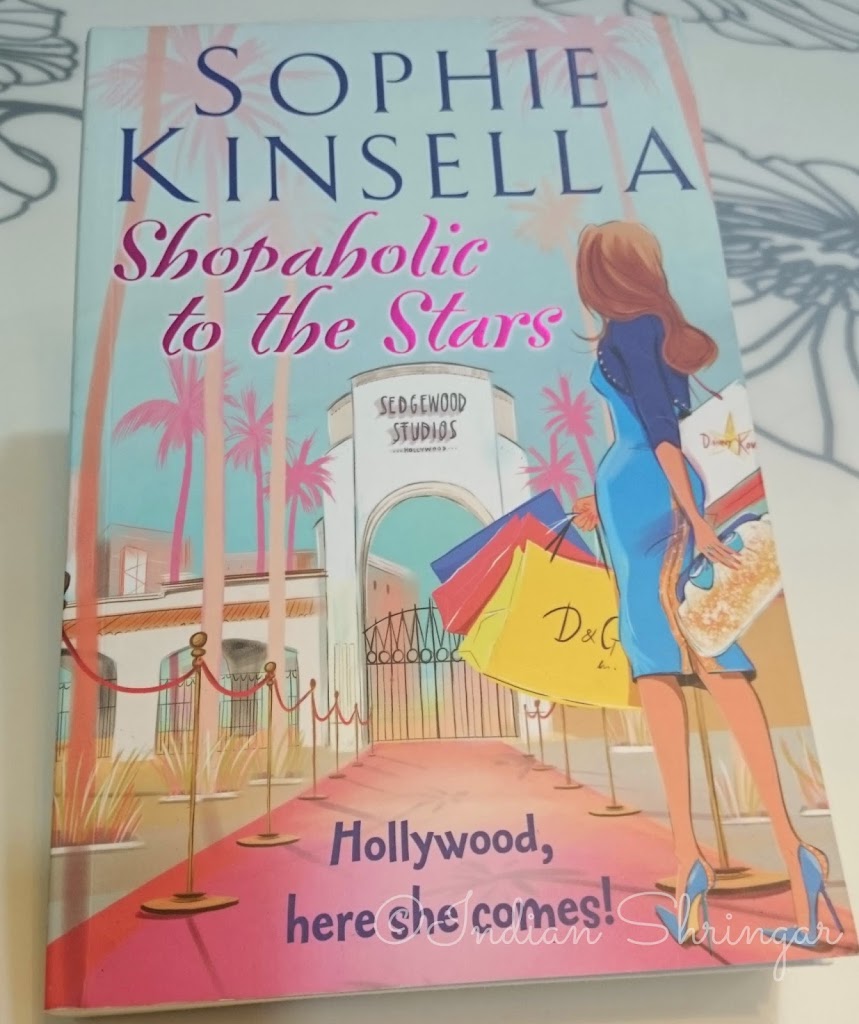 Yes, a book review after quite some time. I really like Sophie Kinsella’s books especially the Shopaholic series but I didn’t really like the last book in the series, Mini Shopaholic, too much. Her last book (not in the Shopaholic series), Wedding Night was absolutely terrible and I really wondered if Kinsella had lost her touch. Nevertheless, when Shopaholic To The Stars released, I couldn’t help waiting excitedly for it to hit the bookstores in India and bought it from the airport as holiday reading during my trip to The Tamara, Coorg. Read on to know if Becky Bloomwood’s new adventure is enjoyable or annoying…..

If you’ve read the Shopaholic series, you would know about Becky’s tendency to hide things, especially from Luke, to live in perpetual denial where her shopping addiction is concerned (though it has landed her in problems often enough) and to be in a continuous imaginary world where the spotlight continually shines on her. While it was a good read during the initial books, by the time I got to Shopaholic and baby, it started getting annoying.
In the earlier books, she would try and think up solutions to her problems herself and while her friends always came to her support, it was her “creative thinking” that got her out of the soup which made for pleasant reading and made her character likeable. In the subsequent books however, she became increasingly dependant on friends and family to help her out (Luke’s grand birthday party). And things are just downhill in this book too….
Shopaholic To The Stars disappoints mainly because of the main protagonist, Rebecca Bloomwood. She seems to be getting increasingly annoying and juvenile even though she is now a mother of  a toddler! As a supposedly mature woman in her 30s, her approach to her “career” is extremely immature and her need to hide things from everyone just grates on my nerves. She never accepts that she is wrong and it is only Luke’s love for her that keeps the marriage intact. She pays more attention to her clothes and accessories than her daughter, husband and friend! Without getting into the story line and other details, let me just say that this has been by far the most disappointing book by Kinsella. There are times when I just feel like slapping Becky and telling her to get real!
I can keep on ranting but then I would disclose the whole story and I’m sure some of you are eager to read this, if only to know whether it is really as bad as I claim it to be. Well, there are some nice humorous moments and the story is quite nice too, but several of them seem really irritating rather than funny. Like the time she parades in front of the paparazzi while getting into the car; it is meant to be funny but I found it stupid and annoying. Becky in this book is no more a lovable ditzy girl; she’s rude, selfish, immature, irresponsible, materialistic and I seriously wonder what Luke continues to see in her.
You also do want to know what happens next but Sophie is ended this book abruptly, leaving the readers in the lurch. On one hand, you feel like you can’t take another dose of the Shopaholic medicine, while on the other, you want the next book to release soon so that you know what happens to Suze and Tarquin, Becky and Luke, Elinor and Luke, Alicia and the others. I feel Sophie has dragged the story a bit too much. She should have finished the series on Shopaholic and Baby but I guess she wants to milk this series for all it’s worth! Sincere advice Sophie, I love your books, but please…..

If only these were my Monday blues. Nevertheless,

Wishing these were my Monday blues 🌊🌊🌊 (w

Couldn't decide on one so posted both. 1 or 2, whi

Wish you all a Merry Christmas 🎄❤ #merrychri

My @mynykaa Pink Friday Sale Haul video is up on m

@pantone 's Colour of the Year is Very Peri - a pe

Wore a skirt after God knows how long so, of cours