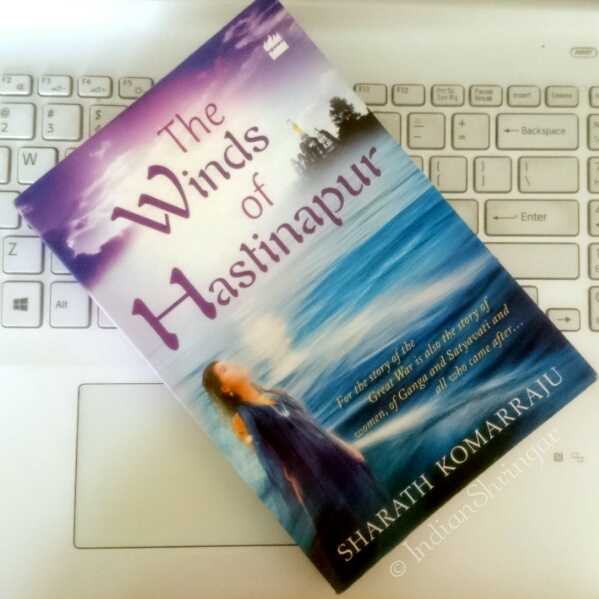 To say that the Mahabharat is my favourite epic would be an understatement. My fascination with this epic borders on obsession. Of all the different retellings of the Mahabharat that I have read, this version, The Winds Of Hastinapur by Sharath Komarrju has to be my favourite and the most fascinating one. He has given a voice to all the ladies in the epic who had a major part to play in the events leading up to the Great War but who, in a very patriarchal way, were always relegated to the background. Read on to know why I love The Winds of Hastinapur….

The Winds of Hastinapur Book Review

In all the versions of the Mahabharat, including the famous TV show of the 80s, Ganga is portrayed as a calm Goddess who doesn’t have any qualms about drowning her own infants because they are the supposed reincarnations of the Vasus. Sharath is the only author who has shown the angst of a mother who has to carry out this agonising task simply because the so-called Gods have commanded her to. This is but one of the reasons why the Winds of Hastinapur and it’s sequel, The Rise of Hastinapur are my favourite versions of this epic.

The Winds of Hastinapur tell us of the events leading up to the battle of Kurukshetra but from the point of view of the female protagonists, Ganga and Satyavati – one a River Goddess, the other a fisherwoman – both Queens of Shantanu, King of the Kurus. Fusing mythology with fiction, Sharath builds a whole new world of “Celestials” and “Elementals” – who are human but who live in the lofty realms of Mount Meru – thus giving a credible explanation to the “Gods” who feature throughout this epic and who keep interacting in various ways with the earthmen. The new spin to this epic is what gives the Hastinapur series a freshness that sets it apart from all the other retellings which usually aren’t more than old wine in a new bottle.

But perhaps the thing I loved the most about the Hastinapur books is the style of writing; beautifully descriptive and evocative, the writing creates vivid imagery in the mind of the reader captivating him/her. The prose is almost poetic and yet easy to read. Sharath has a way with words that not many authors have. Think Ken Follett in Pillars of the World or Jeffery Archer in the Clifton Chronicles; Sharath’s writing is as good, sometimes even better.

Whether you know the story of the Mahabharat or not, you will love reading this book (and it’s sequel) because this is NOT just another retelling.

Obsessed with this nude lip combination and wearin

Wishing you all a very Happy Lohri 🔥 As a Guja

The difference in temperatures between Mussoorie a

My favourite thing to do on a holiday is catch the